It is often said that the more things change, the more they tend to remain the same. That fits like a glove on the new MSI Prestige 15, and I say this as someone who had said last year that the then 2020 edition of the MSI Prestige 15 was holding its ground against the Dell XPS 15. That was then, when the Prestige 15 was clubbed in MSI’s laptops meant for creators. This time around, a bit more than 12 months and a pandemic later, we have the 2021 edition MSI Prestige 15 and it is meant to be considered by business users. The demographic that’d otherwise be considering a Lenovo ThinkPad, HP ZBook, and Dell XPS or Latitude laptops. Clearly, there is still enough choice for those who need a laptop for those dozy meetings, huddled up in a cold meeting room with equally uninviting white lights.

The MSI Prestige 15 in its 2021 avatar is priced around Rs 1,16,990 and that puts in battle against Dell’s New Latitude 15 7520 laptop which is priced around Rs 1,19,446 as well as the HP ZBook Firefly 15 which is priced around Rs 1,19,199 at this time. While Dell has updated the Latitude 15 7520 with the 11th generation Intel Core i7 processor, the HP ZBook Firefly that plays in the same price band still runs the 10th generation Intel Core processors—fine difference, but at these prices, would you really like to compromise? Then there is the biggest competition. The Lenovo ThinkPad range, specifically the ThinkPad P15s. This machine, with the 11th generation Intel Core i5-1135G7 processor starts with a price tag of Rs 1,05,064 while a MSI Prestige 15 comparative 11th generation Intel Core i7-1185G7 processor spec-ed variant is priced at Rs 1,32,296 after configuration. You will be spending a lot of money, irrespective of whichever laptop you are eyeing—or if you’re lucky, your organization would be buying this for you. And I have to say that the MSI Prestige 15 is very much the underdog. You may not realize it from the outset, but this is matching (and in cases far exceeding) what the rivals are offering, and then also brings the price advantage to the negotiation table. 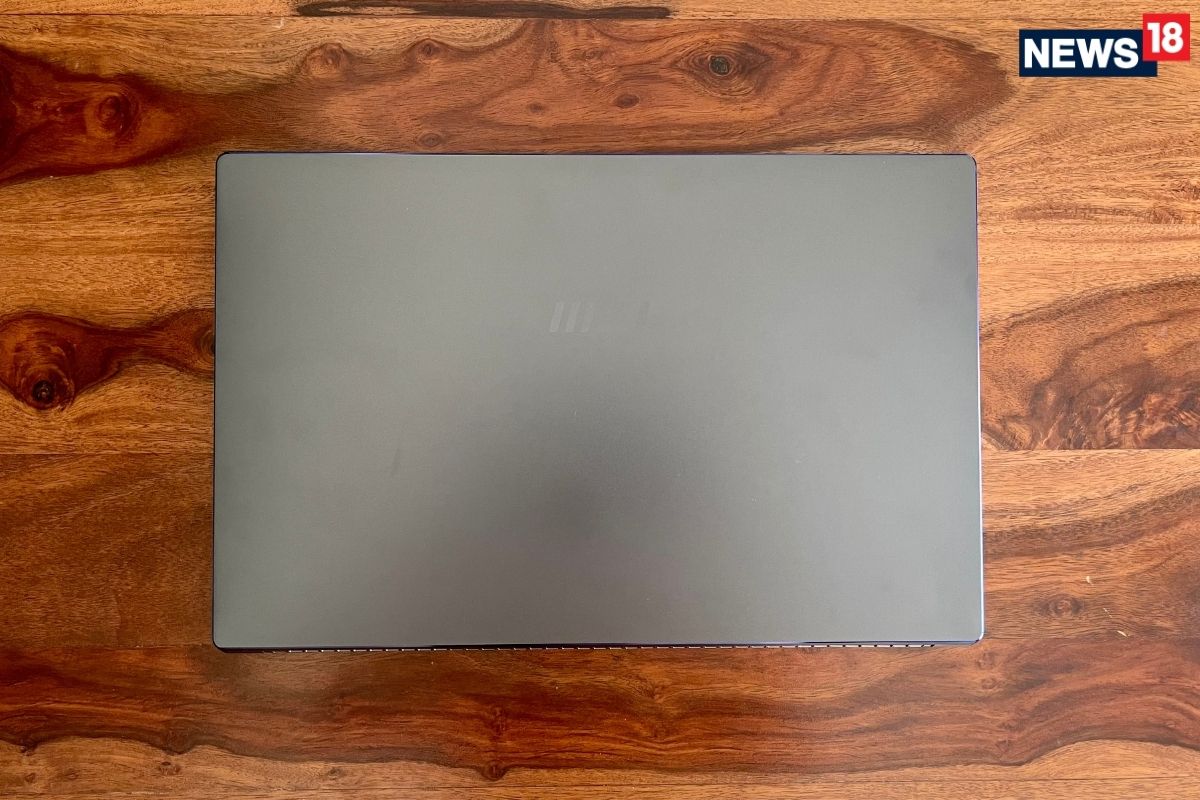 Keeping in line with the new positioning from a creator-focused laptop to one for business users in boardrooms and conference calls, there are subtle design changes that become apparent soon enough. The MSI logo, for instance. Gone is the dragon, which now remains very much a part of the gaming laptop series. But business users can flaunt a sophisticated MSI logo, complete with straight lines—you cannot be having a dragon glaring at others in meeting rooms! This is dressed in a colour called Carbon Grey, and while I am absolutely no expert at colour hues, I cannot but feel there is a very gentle tint of blue at certain angles when light reflects off the lid of the keyboard deck. There is also the Urban Silver colour. The sandblasted texture gives the MSI Prestige 15 a rather nice matte finish while the diamond cut edges on the lid add a genuine dollop of genuineness to the entire look. This is 16.9mm thick when the lid is closed, which is for an easier reference, around two smartphones stacked. Maybe even lesser. The MSI Prestige 15 tips the scales at 1.69kg, which for a 15.6-inch display, is not a bad return for what you are carrying around. Lots of ports too, including two USB-C, HDMI out and two full sized USB 3.0 ports.

Is it just me or do laptops in the Windows 10 ecosystem, absolutely unable to give a completely flat slab look? Pick up any Apple MacBook, and except for the very slight rubber feet, those machines are chiseled in complete symmetry as complete flat slabs. Here, while it is somewhat similar with the lid and the side spines, your fingers will notice the variety of feet that are integrated into the design as well as the slight elevation change in the thickness of the underside panel. And then there is the massive cooling vent on the underside, which to be fair, is absolutely necessary for a laptop as powerful as this. And then there is the slightly uncomfortable positioning of the USB-C port for plugging in the power adapter—this sits closer to the front of the laptop than the rear, on the left side spine. Somehow, I like my laptops more when the power adapter plugs in near one corner and stays out of the way. And I’ll leave you with this thought—for some reason, most Windows 10 laptops and the MSI Prestige 15 is no exception, Windows 10 laptops just don’t have the same build quality as the Apple MacBook series. That being said, the MSI Prestige 15 is definitely one of the better built Windows laptops, in a really long time. The almost non-existent flex in the keyboard deck is a testament to that. I have often said that any shortcomings in a premium gadget get amplified in a consumer’s considering, also because of the price tag that is involved in the decision-making process. That makes life particularly tough for laptops, where consumers approach any purchase with a long-term vision. The intention to keep it in service for at least 2-3 years, if not more. How often do you see friends or family change laptops? With smartphones, it is a different case where budgets and bank account flexibility permitting, annual upgrades do happen often. Ballpark assumption, an average user keeps the laptop for at least 3 Intel Core processor generation upgrade cycles—and these are annual, mind you. That makes it even more important to consider your purchase properly.

This is where the MSI Prestige 15 ticks off the spec sheet part of things very well. This is powered by the Intel Core i7-1185G7, which is by far and away the most powerful chip for laptops and ultraportable devices. Incidentally, this is also the first laptop that I am reviewing with this specific processor iteration, part of the latest generation of Intel Core chips. Then there is 16GB RAM, 512GB SSD and the Nvidia GeForce GTX 1650 graphics. For my usage scenario, the MSI Prestige 15 delivered what can be safely described as a close to seamless experience. For my daily workday scenarios, which are usually handled by an Apple MacBook Pro 15 (lntel), the MSI Prestige 15 replicated that effortlessly. Platform differences definitely play a big role in this and synthetic benchmark may be your port if you’re pedantic that way, but I didn’t notice the Core i7-1185G7’s performance as inferior in any way. There are times when the Microsoft Edge tab count just goes a tad out of control and at the same time, there are multiple Microsoft Word documents as well as some image editing software running—and the MSI Prestige 15 does not break a sweat. The fans stay whisper quiet for the most part, though you will hear them clearly when they do spin up. As a daily driver with the ability to clock up for heavy workloads, the MSI Prestige 15 seems to be more than ready to deliver.

There is a preloaded software called MSI Center For Business & Productivity on the MSI Prestige 15, which has a feature called App Optimizer. The idea is to add apps that you use often, and the system will understand your usage trends over time and pre-allocate system resources for those to ensure better load times and performance. My observations about effortless performance on the laptop come with this feature turned off. And I haven’t had the luxury of time to test this feature as yet. This same utility software gives you software control for turning off the webcam access for apps, till you toggle it on. Irritatingly, I noticed that even if I toggle the webcam access to on for apps such as Microsoft Teams and Google Meet, this turns off every time the machine is restarted. The microphone has the noise cancellation feature, which is handy for voice calls and other participants report that the din of a noisy air conditioner, for instance, if drowned out rather well. The performance observations also were logged with the MSI Prestige 15 set in the Silent performance mode for half the review period, which would see more active clocking down of the processor in case of heating, to prevent the fans from speeding up often. Between Silent and Balanced, my usage didn’t elicit any stutters in the former mode. That is testament to the processor’s power and also the software that is managing performance. Battery life is equal parts impressive and less than expected. In the more dialed down power settings, that is Silent mode (and not Super Battery) and the Windows 10 battery settings leaning towards better battery (but not completely set to best battery life), the MSI Prestige 15 returned 15 hours and 30 minutes when used for daily workflow tasks. Yet, dial this up to Balanced and half balance between battery and performance, the battery runtime on a single charge came down dramatically to 9 hours before I was reaching for the power adapter again. I’ll not completely rule out factors in the background, such as Windows 10 trying to download an update or search indexing kicking in to make note of new files added to the OneDrive cloud storage synced with the PC. All said and done, the MSI Prestige 15 does have the sort of battery life that you’d want—which is all-day, in a nutshell—but this isn’t something a lot of 15.6-inch laptops with the most powerful Intel Core i7 can actually deliver.

The MSI Prestige 15 spec that I’m testing here has a Full HD display. This is, like last year’s MSI Prestige, an IPS-level panel but MSI doesn’t exactly say what this is. Not that it should really matter to you, because this screen does well on sharpness, colour separation, adequate richness and good brightness levels which can compensate for even the most irritating background lights that we find on the ceilings in most offices—for when you do return to office. Ergonomically, I did notice that the cutout in the base isn’t deep enough to allow the thumb to slot in as you open the lid—that’s an oversight, because it is something you’ll notice every time you fish this out of your bag and set it down on a table to start working. As someone who is incredibly finicky about keyboards, the MSI Prestige 15 does had me typing out documents quickly. As quickly as I do on the MacBook keyboard. The reason is the similarity in layout, without the number-pad on the right side of the keyboard, which a lot of 15.6-inch screen size laptops tend to offer. I am not a fan of that layout, and this is what I prefer. Key responsiveness is good and its consistent too. I’d have preferred a slightly sharper response too, in particular with the sound of every key press, because it all sounds and feels a tad spongier than usual. That could, I have to admit, also be a hangover of the MacBook keyboard’s muscle memory.

The Last Word: Serious Performance For A Laptop That Feels As Premium As The Price

The MSI Prestige 15 is responding very well to the realignment from being a laptop for creators to a laptop for business users and enterprises. This is a really powerful specification that you get, complete with the sort of stuff that’ll sit well on a company’s IT department managed network—the privacy option for the webcam, the fast charge battery with Thunderbolt support for data transfers, Windows Hello biometrics complete with fingerprint and face recognition as well as the US Military spec ruggedness rating. And it is not just the spec sheet. The MSI Prestige 15 delivers in terms of the performance, battery life, the display and keyboard as well as the build quality in general. Suddenly, laptops from Lenovo, Dell and HP have a very serious rival, in the most serious of price bands for laptops.